There is only one golden rule:
The ONLY thing that gets people into events is other people. If you already have people coming, other people will come. As far as nightclub events go, this is the ONLY rule that matters. I promise you.

Here’s a few other lesser rules:

Here’s the “How many people are coming to my event” Forumla:

All this digging out old stuff from my past as a Chicago Rock Cafe DJ in the 90s reminds me that they used to have this thing called “Chicago Cats” or something. Basically, the bar staff would work out a dance routine to something awful, like “Greased Lightning” and at some pre-appointed time, probably midnight, the DJ would put on the record and the “Cats” (ie barstaff) would stop serving drinks, get on the bar and perform their dance routine.

It was, without doubt, the most excruciating thing ever. 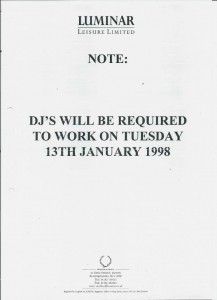 This diagram came from the handout provided by Luminar Leisure during one of their monthly “Patronise a DJ” meetings (which, I hasten to add, I never attended, despite constant ‘last’ warnings). So in 1997, nearly ten years after turning professional, I was bemused to receive a memo containing the following diagram, presumably telling me what I had been getting wrong over all these years. Idiots.

It’s 1992, I’m the DJ at Cambridge’s first Student night, the club’s busiest night by far, my contract has just been extended and I’ve been given a payrise. Enter the New Manager, who’s first action was to sack the existing DJs so he could put his mates in. As I’d been there nearly 5 years, had a baby son and felt a bit hard done by, I didn’t want to take this lying down.

So whilst clearing out the garage today, I found this heart warming series of letters.