This document is her Bastardy examination document from October 1772, where she swore John Bartlett of Colyton to be the true Father of Sarah. Full transcription underneath. 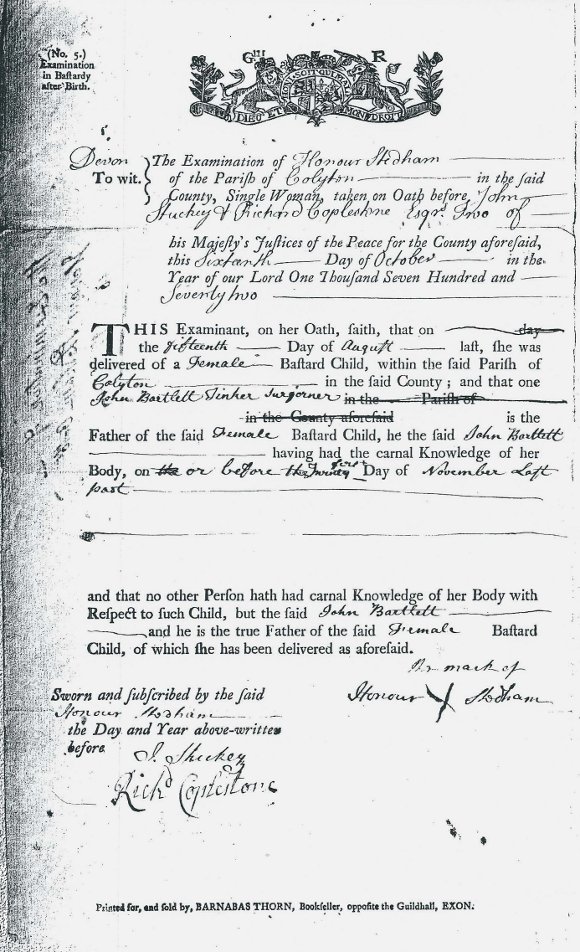 “Devon To wit. } The Examination of Honour Stedham of the Parish of Colyton in the said County,Single Woman taken on Oath before John Stuckey & Richard Coplestone Esq. two of his Majesty’s Justices of the Peace for the County aforesaid,this Sixteenth day of October in the year of our Lord One Thousand Seven Hundred and Seventy Two

and that no other Person hath had carnal Knowledge of her Body with Respect to such child,but the said John Bartlett and he is the true Father of the said female Bastard Child,of which she has been delivered as aforesaid.

the mark of
Honour X Stedham

Charles Mayne (The ‘Down’ does not appear until his first marriage) was born the ilegitimate son of Francis Mayne nee Stedham in Colyton, Devon on 23 March 1808. She was listed as a widow, and her husband Philip Mayne had not been heard of for a number of years. In 1810, she married James Snell. Was James Charles’ real father? His entry in the Colyton parish baptism register appears to have been added at a later date, and only mentions his birth date – his baptism date is given as ‘-‘. Deepening the mystery, the entry does not appear in the Bishop’s Transcripts for Colyton. And where did the name Down come from? Did Charles know who his real father was and add the name to embarrass him? Or did a ‘Mr. Down’ sponsor his education – Charles came from a poor, uneducated background, yet managed to have a book published, and owned a number of bookshops and properties in the Exeter area. Any suggestion welcome!